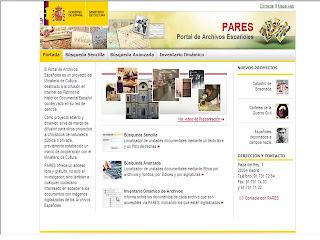 Hands down the best website for Spanish genealogy is http://www.pares.mcu.es The website has great genealogical information and online records for the entire country of Spain. If you haven't visited the site yet, you are missing out on some great stuff. Granted it doesn't have every Spaniard that ever lived, but it is a great place to start.

A couple of weeks ago I was in Austin, Texas presenting a couple of classes at the Nosotros Los Tejanos confernece. One of my classes focused on finding immigrant ancestors from Spain. I quickly found myself adjusting my class to the audience...you can really divide Spanish emigration into two time periods 1) Early to 1821 2) 1821 to Present-more or less. Of the fifity plus that were in the class not one had ancestors that arrived after the Colonial period ended. The class that I had hard time preparing actually became fairly easy to teach, thanks to Pares.

I am not claiming that all Spaniards will be in the database, however, Spanish law before 1821 'forced' all those leaving to go through the port in Sevilla. How many actually followed that law 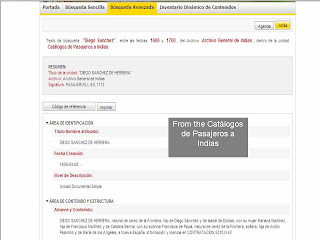 compared to how many actually emigrated is another topic. The Archivo General de Indias maintains a collection called: Libros de Asientos: Pasajeros a Indias, and has published a series of books called Catálogos de Pasajeros a Indias, which is basically an extraction of the libros and the petitions to emigrate from the Sevilla port. Both of these are available through Pares (up to 1700 at least). The Catálogos de Pasajeros a Indias is important in this case, because it makes searching the libros de asientos possible. The libros de asientos on the site are the actual images listing the emigrants, which are not in the best shape, and for anyone trying to read Spanish handwriting from before the early 1600s knows how difficult it can be.

The best way to access the collections is to do a Búsqueda Simple or Avanzada. To narrow your search make sure that you specify a time period and select the appropriate archive...in this case that would be the Archivo General de Indias. You can browse the collection by selecting the Inventario Dinámico de Archivos and selecting Archivo General de Indias. To see the original images you will need to enter the Casa de la Contratación the extracted entries can be 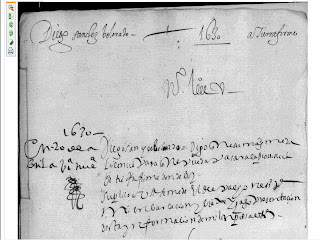 browsed by going to The Catálogos de Pasajeros a Indias.

Before you search you will want the essentials...at least the name of your immigrant ancestor and a fairly narrow date range of when he left Spain for the New World. Without at least this information you search might be in vain. Please keep in mind that I am not advocating that everyone that emigrated to the New World between the mid 1500s thru about 1821 will be found on the site. I am suggesting that you begin your search here though...searching the internet from home is a lot cheaper and faster than most other methods. Give the site a chance, I think you will be surprised how much genealogical and historical information the Ministerio de Cultura has added to the site. The site is free to use, and it has become a lot easier to use too.
Posted by Lynn Turner, AG at 8:01 PM

I have a couple of questions which I was hoping you could answer. Did people to whom permits were given to set sail to Spain’s overseas territories have to register anywhere at their port of arrival, or did they have to show their permit when they disembarked or anything else? Are there any archives which one can search for people arriving from the old world in the new world, just like one can search the PARES database for people leaving the old world?

I understand that illegal emigration from Spain to Spain’s overseas territories was widespread. I remember having read somewhere, but I cannot remember where, that up to half of all people who emigrated to Spanish America did so illegally – so without getting a permit. What are your thoughts on this figure? Finally, could you recommend any books on emigration from Spain to the Americas during colonial times in general?

Thank you for your reply.

Lynn Turner, AG
I graduated from BYU in Family History and Genealogy in 2004. My areas of expertise include Spain and Latin American. Currently I work for FamilySearch as a Record Specialist. I hope you enjoy the blog!